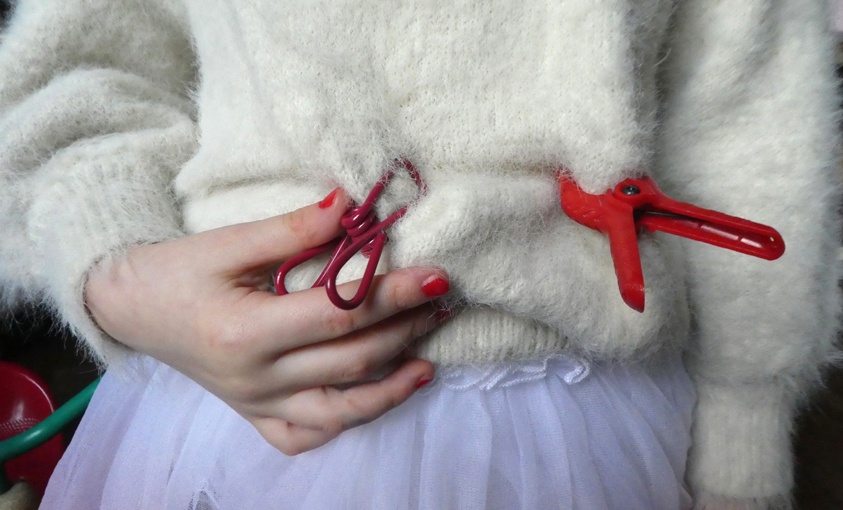 Oh, having a little nap, eh? What an angel… so cute. The picture of happiness!
Looks just like you! You must be very proud! Sleeping full nights already?
Is it a boy or a girl? What name did you choose? Omar, that's a lovely name.
No? Oh…You mean Homard as in lobster?
Is procreation an art because it contains the word creation?
Hmm, it's graphic art, the product of creation! Wow!
But Ms Bauer?... "What's the connection between a lobster and a cradle?" » and...er, what's "the influence of rocking?" A lot of experts are now wondering why people want to soothe lobsters? Is it for the sake of art… or animal well-being?

Homard Chéri is an installation that presents a flexible velvet sculpture representing a lobster in a rocking cradle. The gentle to-and-fro movement of the cradle is meant to evoke the tender moments of early childhood. Why does the lobster need to be soothed? Different interpretations are put forward. If we look at it from the culinary point of view, great chefs recommend that we caress the lobster and sing a soothing melody to it before throwing it into the boiling water. They say that its flesh will thus be more tender and better tasting. Homard Chéri can also be seen as a Kafkaesque drama in which the new-born baby is transformed or has been replaced by a lobster during the night. What a nightmare! In any case, when a lobster is red, we can be sure that it is dead. So, is it a farewell ritual? Given its shell and its warlike attitude, there is a myth which recounts that lobsters are immortal. The mystery remains.

We invite you to meet-up with the artists in front of the CeCiL's Box on Thursday March 24 at 12:00.