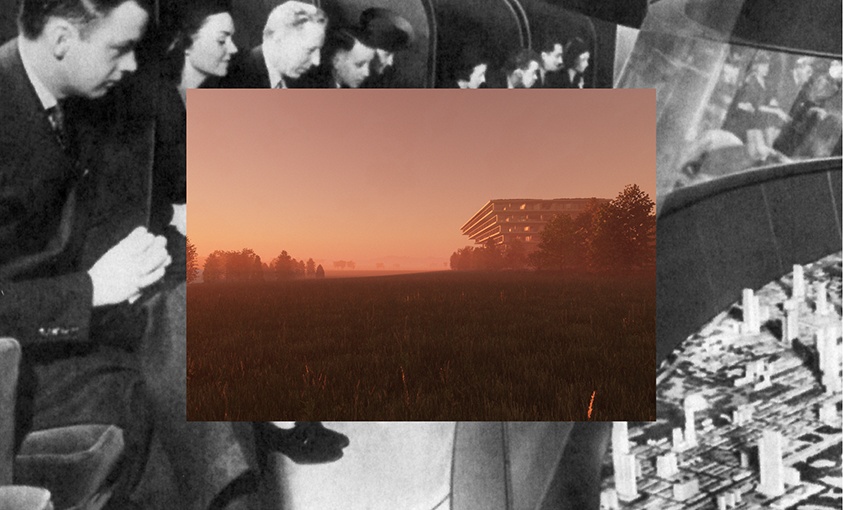 For the last ten years, 2001* has recurrently engaged with building as much as with speculating about alternatives and futures for Luxembourg, often attempting to blend both.

In the framework of a guest professorship at the TU Kaiserslautern, studio 2001, dubbed “dwelling on transitions”, investigated alternative prototypes tackling both the housing crisis as much as the transition(s).

M.O.A.R. is a selection of paper projects developed during the summer semester 2021 with students from various backgrounds. Speculations and provocations that are crucial for the current debate and relevant for the future condition of our shared environment.

A production by bureau d’architecture 2001 and studio 2001 TU Kaiserslautern.

We invite you to meet-up with the artists in front of the CeCiL's Box on Thursday 16th December at 12:00.

*2001 is an architecture company, founded in 2010 by Philippe Nathan and led since 2014 in partnership with Sergio Carvalho.
The abstraction of its name symbolizes the office’s ambitions to operate discreetly yet determinedly in the environment practiced by society.
This environment defines the office’s fields of interests, activities and scales:
Territories, buildings, spaces and ideas.

On an urban diastema, a tiny residual plot, this building produces amenities for the city: a vertical compact parklift liberates in an immediate future the surrounding streets from cars. In a more distant future, the carrousel parking spots will be used for raised garden beds, making plantations accessible from the residents’ kitchens. A second, rather massive structure contains stairs, elevator and standardized bathrooms. The two shafts lift the apartments from the ground to generate a covered public space and minimize the tower’s footprint. The roof is as much greenhouse as botanical garden and sanatorium: it collects rainwater and grows local and exotic produce for the 26 inhabitants, and the city.

Private housing surfaces are reduced to Existenzminimum: capsules containing a retractable bed, a desk and a cupboard define the ultimate perimeter of daily needs and privacy. They are stacked to the sky to form four columns. Two additional shafts contain the stairs and the elevator. All of these functions give to a grand open space hosting the shared facilities: a large Kitchen is the center of the vast space and of social life. In the corners between the shafts, specific living areas frame different views in a particular natural light. On the lower floors and accessible from the covered plaza, the shafts contain compactable storing for remaining private material possessions, souvenirs and artefacts of a pre-digitized past.

48 apartments or 1782m2 of inhabitable surface tiptoe on a mere 50m2 footprint. The delicate stacking of modular wood elements produces a balancing inverted pyramid, protecting from unbearable summer sun light and doubling outside surfaces to host gardens and terraces. Every apartment thus has the outside space necessary for self-sufficient vegetable production.  In the lower levels, water is harvested and stored to irrigate the covered landscape.