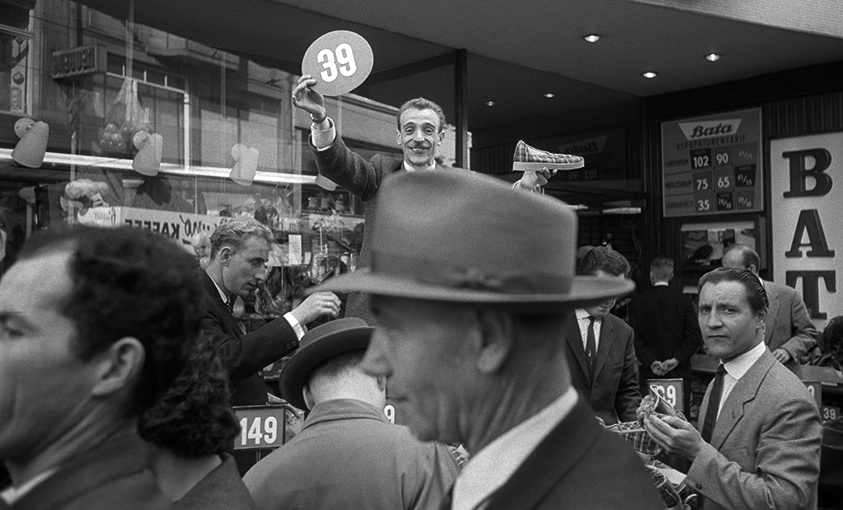 of people and streets


The exhibition is arranged by themes, such as the Schueberfouer, the Braderie in the city of Luxembourg, trades, night scenes, street scenes, youth, portraits, still life photos, architecture and the Grand Ducal family.
A set of 44 portraits, Pol Aschman's favourite subject, which can be found throughout his career, is placed at the centre of this exhibition. This series of portraits can be compared to the work of the photographer August Sander (1876-1964), which the latter did in Germany in the 1920s and 1930s. The portraits in this series by Pol Aschman are mainly from the 1950s and 1960s. Women, men and children, photographed with a Rolleiflex 6x6 camera in black and white, at home, in the streets or at work. People from all social classes were photographed with respect and from a certain distance. They were proud people or those who were a little shy, in confidence with the photographer.


A second set of 16 photographs shows crowds of people contemplating a scene which is taking place or will take place, a kind of off-field action which is unfolding in front of them. This is a type of image which Pol Aschman took almost every time he covered an event and which shows the enthusiasm of the people to be present and to have their picture taken. Pol Aschman voluntarily placed himself in the picture in his reports and for example put on the uniform of the ticket inspector in the report on the tram in Luxembourg in 1958.


In the course of the numerous photo shoots for the Grand Ducal family, a certain complicity developed over time, and this is demonstrated through images in which this interplay of looks is palpable.

The lightness of post-war youth, which he and many young people of his generation did not really experience, is another subject very present in his photographs. He shows a rediscovered freedom, a joy of living, the carefree attitude of the gangs of kids in the street, the reunion at the Bichermaart after the summer vacations.
It is through these images that we discover a character with multiple facets, colourful, sensitive, marked by his time and who wanted to show us the small stories next to the big events and to draw attention to the facts of society, and people living on the fringe of it. He was a traveller with his eyes in search of meetings and exchanges.
Also worth seeing are the architectural photographs taken with the Linhof Technika 13x18 camera, purchased in 1952.


The 160 photographs on display in this exhibition are a small part of the220,000 negatives of the Pol Aschman photographic collection, which has been housed at the Photothèque of the City of Luxembourg since 1997.

In accordance with the health instructions related to the Covid-19 pandemic, the number of visitors in the exhibition space is limited to 35 people. It is mandatory for visitors to wear a mask and maintain a distance of 2 meters between each other while visiting the exhibition.